Corie Cole: Landscape with the Fall of Torrijos

Welcome to Art ExAlt! And thanks for reading! Over the next year I hope to write a new post each week about a work of art or an art related position in society that is characterized by altruistic intention. I hope to approach an understanding of how art is useful in advancing the greater good. For my first post I was lucky enough to be in the same city as the lovely Corie Cole and she kindly volunteered to be my interview guinea pig. I hope you enjoy the first of many posts and also feel free to leave any comments if you have feedback, ideas, or questions 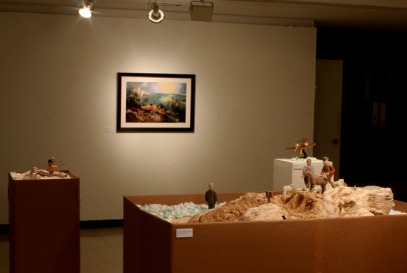 Colorado Springs ceramicist Corie Cole is a talented artist whose work varies widely; from a “Co-meme-orative” series of homages to internet celebrities like grumpy cat and that adorable sneezing panda, to serious pieces of eloquent political commentary about issues of globalization and mass production. The latter caught my eye as I searched for examples of altruistic works of art for my inaugural post.

First I wanted to understand exactly what a political artist like Corie does. I found some useful resources on the the Art21 blog, as well as in footage of a panel discussion held at the New School titled, “How Can Art Affect Political Change?” I gathered that political art is a device used to disseminate ideas about an issue and to encourage viewers to think critically about it. Humor, shock value, irony, and appropriation of iconic images are all commonly used by political artists to achieve this goal.

I believe Corie employs something a little different, however. Though this piece is a little bit humorous (Jimmy Carter looking like a distraught and ineffective Homer Simpson), and is chock-full of irony, it is the elaborate and realistic rendered quality of each element that draws a viewer in and entices him or her to try to understand what’s going on. The energy she put into each component is so apparent, and her skill at rendering so refined, the works begs for a second look if not a few hours on Wikipedia searching things like “George HW Bush Panama Canal Unhappy.”

The choice of ceramics as a medium seems curious at first. Clay evokes a sense of gravity thanks to its role in the development of civilization; ancient Greek vessels and native american tools remind us of its long and venerated past. Using this material to make caricatures of nearly forgotten politicians poses an interesting contrast. The permanence and expense of this choice lends a solemnity to the subject matter, further prodding the viewer to spend time considering the subject. This is no disposable political cartoon about a one-off gaffe. This is a permanent monument in miniature to a hundred years of contradicting policies, questionable moral judgements, and broken promises carried out in the name of expedited world trade.

After exploring some of the devices used to intrigue the viewer one might wonder why an artist would go to such lengths to do so. Corie’s goal, I learned in our interview, is to get people to pay more attention – not just to her work but to the role the US plays in world affairs. One obstacle citizens keen to be informed about such things face is the constant barrage of news updates from around the world. Corie expressed doubt that “…human beings are really made to deal with that kind of complexity.”i Everyone has had the experience of clicking on an article, starting to read about an injustice in some distant country, only to drift to Buzzfeed to watch Slow Loris with a Tiny Umbrella after a few paragraphs. This indifference doesn’t make us cruel, it makes us what we are; humans with finite supplies of empathy (not to mention attention spans).

The limits of human empathy are also the subject of “Landscape with the Fall of Torrijos” and the Pieter Breughel painting that inspired it. As Icarus’ fall from the heavens goes largely unnoticed by the plowman in the painting, so does the fiery and controversial demise of Omar Torrijos Hererra go unnoticed by the politicians in the foreground (and presumably the American public). The daily grind wears on for the plowman, the politicians, and the public whether the sky is falling or not, and with constant news updates pinging our smart phones its very hard to discern which soundbite is worth a second thought.

Corie’s work addresses this current events fatigue by distilling a century’s worth of historical information and “re-synthesizing it in a way that allows you to grasp it on a different level.”ii This intricate “allegorical diorama”iii is an illuminating respite from the 24 hour news cycle.

Reformulating history in this intriguing way accomplished two important altruistic goals: First, it encourages viewers to learn about this unflattering episode in our country’s history and therefore become more informed citizens. “I do have a tendency to believe in democracy and believe that its necessary to have an educated public to have a functioning democracy”iv said Corie on Radio Colorado College’s “The Big Something” earlier this year. The second altruistic achievement is the work’s participation in the patriotic tradition of questioning government. In a democracy we progress by critiquing our actions and leaders, and political artwork is one effective and entertaining avenue for doing so.

So go forth, educate yourselves about the history of the Panama Canal in an innovative way! Or at least check out photos of the piece and listen to a very smart lady discuss her brilliant works:

History of the Canal

Add some immortalized memes to your life

Finally, I leave you with an excerpt from the poem that planted the seed for the creation of this work:

…In Brueghel’s Icarus, for instance: how everything turns away

Quite leisurely from the disaster; the ploughman may

Have heard the splash, the forsaken cry,

But for him it was not an important failure; the sun shone

Water; and the expensive delicate ship that must have seen

Something amazing, a boy falling out of the sky,

Had somewhere to get to and sailed calmly on.